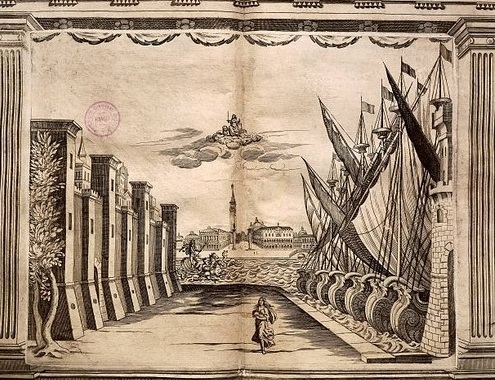 Hero of Alexandria and the machinery of the modern theatre

The modern theatre was invented in Italy in the late sixteenth century. Before then, the revived tragedies of classical Greece, the plays of Terence and Plautus, and modern comedies, had been performed in converted halls, or in buildings that recreated ancient amphitheatres. The most famous of these was the Teatro Olimpico at Vicenza, designed by Andrea Palladio, who followed closely the precedents of surviving Roman theatres and the advice of the Roman author Vitruvius in his Ten Books on Architecture. There were some indications of dramatic settings on these stages, in the form of portable ‘props’, and periaktoi – rotating triangular prisms with different pictures on their three faces, that could be turned to evoke changes of location. The Teatro Olimpico had receding ‘streets’ in false perspective. But in general these stages were inflexible, and it was impossible to effect complete pictorial changes of scene.

Around 1500 a wholly new form of entertainment, the intermezzo, was introduced to the Italian stage in Ferrara and Urbino, and later taken up with great enthusiasm at the Medici court in Florence. Intermezzi were musical interludes with singing and dancing, between the acts of conventional plays. They were immediately a great success. Audiences sat impatiently through the dramas waiting for the entr’actes. They featured Olympian Gods in the clouds; the nine Muses on Mount Parnassus; gardens and countryside where bare trees and plants came into leaf and bloomed in full view; the sea with Neptune and his Tritons, accompanied by whales and dolphins; and the fires of Hell, populated by demons and damned souls. They required many changes of fantastic scenery. The intermezzi are one of the sources from which the art of opera evolved, later in the century.

New theatres were built in Florence, Ferrara, and the great Teatro Farnese in Parma, with machinery by which scenes could be changed easily, and spectacular effects produced. The stages had proscenium arches, so that moveable scenery could be concealed at the sides. Flying chariots and flying gods supported on wires could wait on platforms above the stage. Other scenery and players were ready in traprooms below stage, and could be lifted up. Mountains or towers of considerable height, made in several telescopic sections, could rise from the stage.

In the early Florentine intermezzi it seems that enlarged versions of the periaktoi were used at the sides of the stage, and painted flats running on wheels at the rear of the stage, so that scenes could be changed at speed, in full view of the audience. Later at Ferrara a new type of device was introduced, the chariot, which also ran on wheels and carried a scenic flat, pulled on and off stage with ropes. The ropes were wound round a large cylinder below stage, so that many flats could be moved at once, even more rapidly, powered by counterweights and controlled by a single stagehand. (The invention of the chariot has traditionally been credited to the Venetian impresario and stage designer Giacomo Torelli, but this has recently shown to be incorrect.)

Intermezzi were presented in Florence in the new Uffizi theatre of 1585, for which the architects were Giorgio Vasari and Bernardo Buontalenti. It was Buontalenti who designed the scenery, costumes and effects for the intermezzi of the 1580s and 90s. New theatres in Ferrara, and the Teatro Farnese, were designed by Giovanni Battista Aleòtti, who was the true inventor of the chariot system. Besides their stage work, both Buontalenti and Aleòtti were fascinated by automaton figures, and designed grottoes with automata for the country villas of the Medici and d’Este families. They found models for the design of these automata in an unlikely ancient source, the Pneumatics of Hero of Alexandria.

Hero was active in the first century AD. His book is a compendium of mechanical ‘theorems’ – surprising devices demonstrating different physical effects, not just water pressure. Several theorems feature human and animal figures: birds singing and drinking, Hercules slaying a dragon, dancers whirling on a turntable. Both Buontalenti and Aleòtti made translations of the Pneumatics. Aleòtti published his version and added new ‘theorems’ of his own. 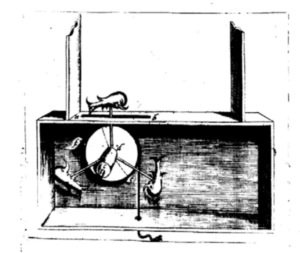 Dolphins in The Legend of Nauplios mounted on a wheel, so that they rise from below the stage.

Hero of Alexandria and his automaton theatres

Hero wrote another book, On Automata Making, which describes in detail the design, construction and operation of two miniature theatres, which put on performances automatically without human intervention. One theatre is mobile. It rolls forward on wheels, presents its show, ‘The Apotheosis of Dionysus’, and retires again. The second theatre is fixed, and presents ‘The Tragedy of Nauplios’ in several scenes (https://www.youtube.com/watch?v=5LBlusUD3Kg).

The design of Hero’s fixed theatre is quite unlike the classical amphitheatre. It has a proscenium, with doors that open and shut on successive scenes. There is mobile scenery, in the form of a bolt of lightning that descends from above and kills the warrior Ajax; and scenery coming in from the side, in the form of a rolling panorama of the sea across which the Greek fleet sails. The goddess Athena stands up and circles the stage, guided by a slot in the floor. Dolphins, supported on a wheel, leap from below stage through another slot. The protagonist Nauplios lights a beacon to lure the Greek fleet onto the rocks, where they are wrecked. All this is powered by a motor in the form of a heavy weight, allowed to descend slowly, like the weight of a grandfather clock. The motor pulls on cords that are wound on cylinders, to control all the mechanical parts and activate them at the right moments. 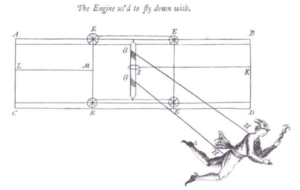 Sir Philip Skippon’s sketch of a flying machine used at the Teatro Santi Giovanni e Paolo in Venice in 1665.

There are startling similarities with many features of the theatres of Buontalenti and Aleòtti. These parallels have not in general been noted by theatre historians or historians of automata. They include the proscenium arch; the movement and rotation of scenic elements by cords or ropes; mobile scenery brought in from the side; scenery and special effects dropped from above; and sea creatures rising up from below. The slots in the stage, along which Athena is pulled by cords, and through which the dolphins appear, prefigure the slots in which Aleòtti’s chariots moved. The chariots were similarly controlled with ropes wound on cylinders.

I believe that Buontalenti and Aleòtti, with their great enthusiasm for Hero, must have read and been inspired by On Automata Making. I have found no documentary proof of this, although a translation was made and published in Italy in 1589, and the book was known to other contemporary writers on the theatre. It is the ‘startling similarities’ between the new Italian theatres and Hero’s design that provide the evidence.

Philip Steadman is Emeritus Professor of Urban and Built Form Studies at University College London. He is the author of Renaissance Fun: The Machines Behind the Scenes (UCL Press, 2021).

← Music in Paris, 1200: Ambitious, Exciting, Lost…
‘It Was Drawn from the Life’: Medieval Alchemy and the Proto-Homunculus →