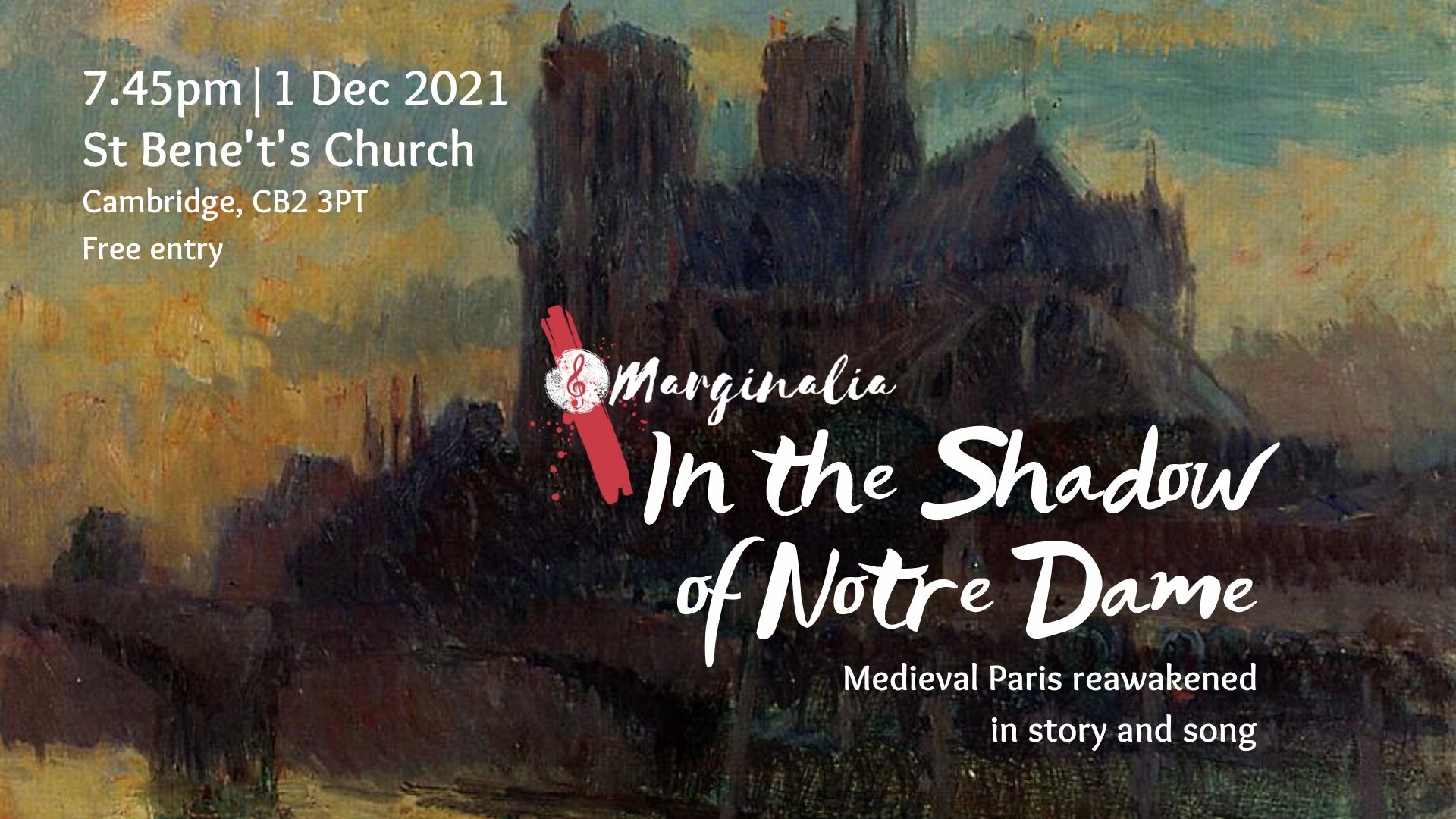 In this post, Chloë explores the vibrant, unique, and little-known polyphonic practices developed in the cultural and intellectual hub of twelfth-century Paris. As part of the Multimedia Craft of Wonder, she is organising a concert, freely open to the public, called ‘In the Shadow of Notre Dame’, which will explore some of the most mesmerising and intricate music of all time, and tell the stories of the exquisitely talented, yet forever nameless singers who created it. You can reserve tickets for that concert here.

At the end of the twelfth century, Paris was an exciting place to live. It had recently become the seat of the French royal family so its infrastructure was greatly improving. The population was expanding quickly as scholars travelled many miles to study in the intellectual centre of Western Europe, and in 1163 on the Île de la Cité, work began on the new cathedral of Notre Dame. This monumental project that took nearly 170 years to complete is testament to the cultural and political importance of Paris at that time.

All of these things contributed to making Paris not only an intellectual and commercial centre, but a musical one too. With the influx of scholars and students came highly-skilled musicians to the city and the new cathedral church had the resources to employ a large number of the very best of them as singers. Mostly, they sang plainchant which has been sung as part of Christian worship for several centuries by this point. Plainchant is a single line of music: everyone sings the same thing. On important occasions (like Christmas, Easter and important Saints Days), however, they embellished that chant by adding an extra vocal line. In other words, they sang it polyphonically (as a duet). Musicians had already been doing this for many hundreds of years, but Parisian musicians developed entirely new and hugely ambitious ways of doing so.

The Creation of Organum Purum

My research focuses on how one particular kind of Parisian polyphony was created. Organum purum involved the notes of the plainchant being sustained for many times their usual length and long and complex melodies being spun out over the top of them. Previously, most scholars have addressed this question by looking at one very small and highly idiosyncratic treatise on the creation of organum purum (The Vatican Organum Treatise). Just a single copy of this survives and both its date and provenance are very uncertain. There has been almost no engagement with the hundreds of two-voice pieces recorded in the three extant manuscripts containing the Parisian repertory. By comparison to the eight bifolia of The Vatican Organum Treatise, these are a hugely rich source, but they still need to be treated with care. This is simply because notated, fixed pieces of polyphony are in a way antithetical to the creative practice which we are trying to access through them.

Whilst it is certainly true that there was an accelerated interest at this time in developing ways of notating polyphony, the creation and circulation of polyphony was definitely still mostly oral. The challenge then is to allow notated, fixed pieces of polyphony to speak of a musical tradition that was mainly oral, and which likely involved regular creation and recreation by lots of different singers both before and during performance and in which the same chant was perhaps never elaborated in quite the same way twice.

One way around this is to look at the surviving organa not as individual pieces, not as separate, fixed musical creations, but all together, as a record of a way of singing, a record of a creative practice. I began simply by transcribing and singing large numbers of organum purum melodies. I quickly noticed that lots of them were quite similar: that vertical consonances (the distance between two notes sounding at once and the particular sound that produces) were used in similar ways and similar places, that there were patterns to the use of larger intervals and repeated notes, and that section endings and beginnings were often the same. The same kinds of short-term repetition, development, mirroring and sequencing kept reappearing in different melodies and there were a small number of short melodic patterns that were also used with particular regularity. 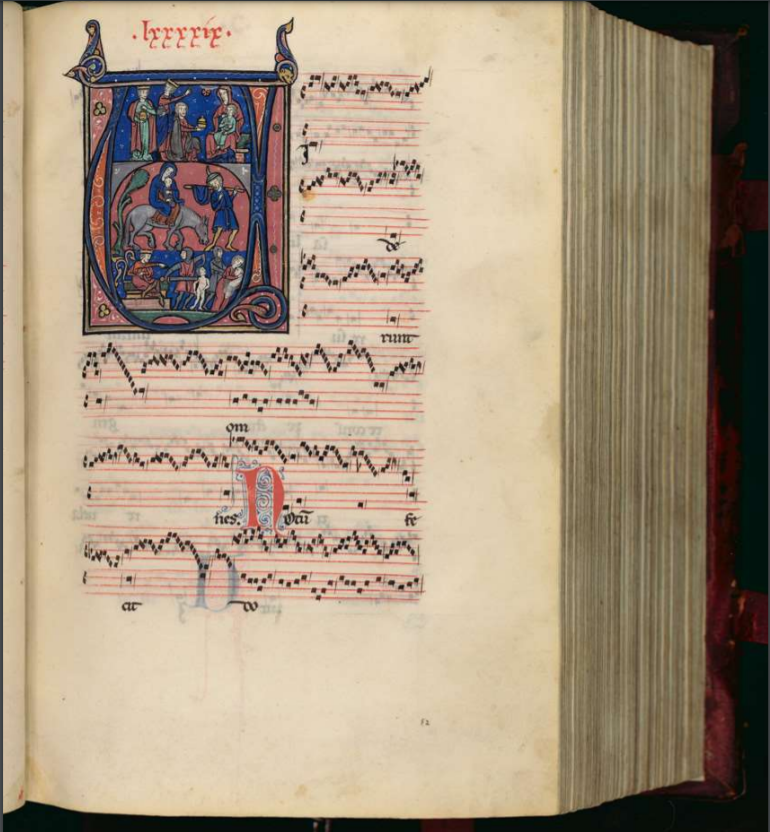 Two-voice piece for Christmas illuminated with Visit of the Magi, Flight to Egypt, and Slaughter of the Innocents, Manuscript F (Florence, Biblioteca Medicea-Laurenziana, Pluteus 29.1), fol. 99r.

Communities of Singers and their Creative Idioms

It seems, then, that there was a shared set of procedures and strategies (a creative idiom) that supported the creation of lots of different purum melodies. The development and sharing of this kind of creative idiom makes sense given what we know about Parisian singers: they sang together every day; they were trained in the same way; they already shared a melodic language in the chant they sang every day, and they had inherited the same polyphonic tradition. If they were singing polyphony, one day they might be singing the chant, the next they might be creating a new upper voice to sing above it, and vice versa. In this environment, they would have learnt from each other and shared ways of creating melodies. The best methods would have been used most regularly and would therefore have become the favourite methods.

If we look therefore not at how individual organa were created, but at the creative practices to which all the purum melodies they contain bear witness, we can use fixed, notated pieces to learn about a vibrant and fluid musical tradition of which they are just one crystallisation, a shadow, an echo perhaps. Identifying a shared creative idiom gives us a glimpse of all the polyphony that was sung and never notated, or that which was notated but did not survive. It also gives us an insight into the creative world of unnamed singers who lived eight hundred years ago.

← Medieval Magic Tricks: Jumping Rings, Running Eggs, and Twisting Chickens
Hero of Alexandria and the machinery of the modern theatre →