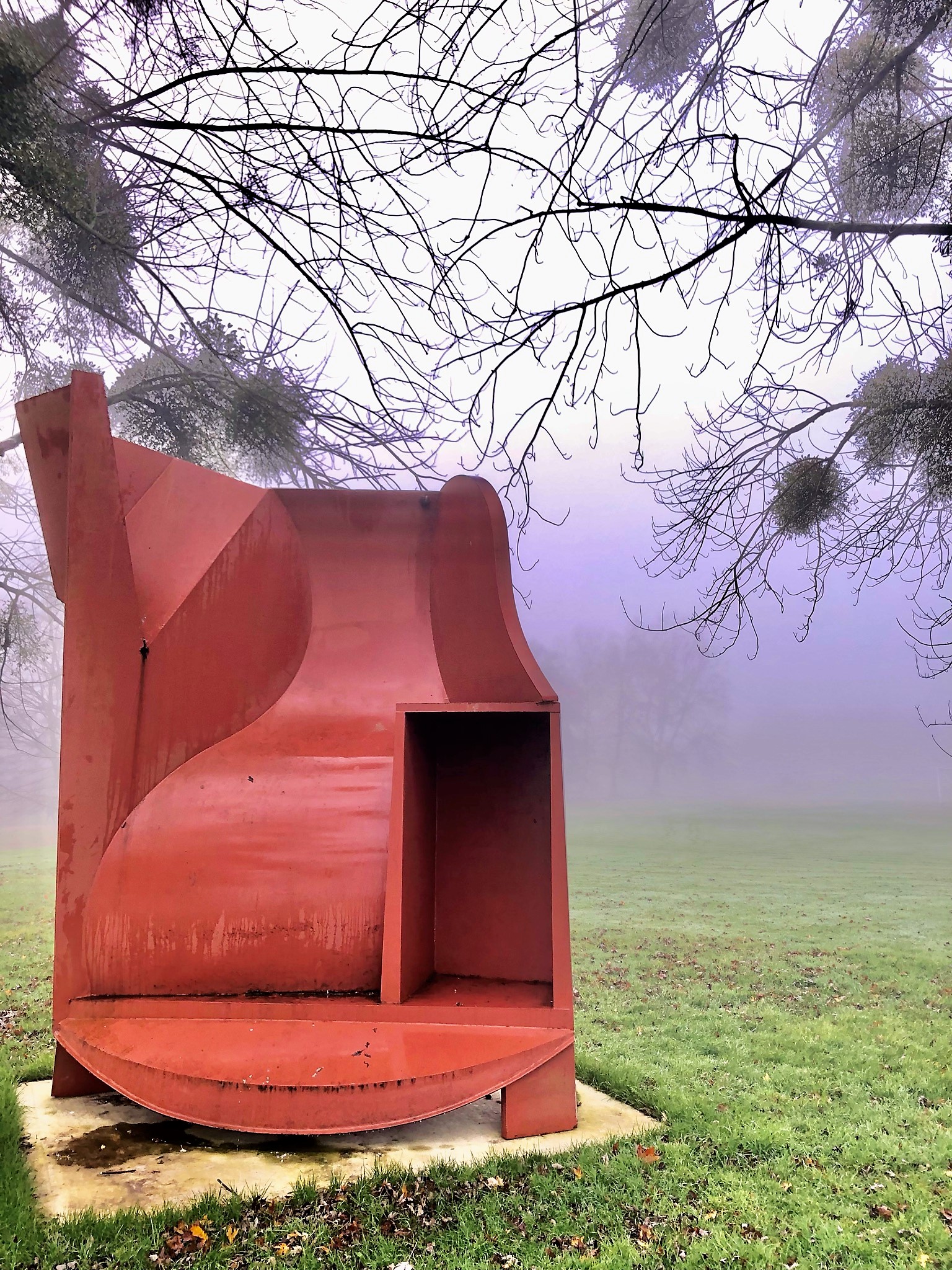 Churchill College, the setting for our December conference, is an institution known for its twentieth-century Brutalist architecture, extensive modern art collections, and engineering expertise. In this post, Josh Fitzgerald explores themes of wonder, craft, and multimedia through one of the sculptures located in Churchill’s grounds: Peter Hide’s sculpture Plainsong (2000). Josh’s post highlights the ways in which Hide’s abstractions recreate performance space, sights, and sounds. Connecting Plainsong’s modern forms and origins to the medieval and early modern themes of the conference, Josh shows that—in more than name alone— Hide’s Plainsong resonates with the medieval and early modern hierophantic tradition of chanting, called plainsong and plainchant. He suggests that exploring Hide’s work in dialogue with plainchant adds nuance to the study of how humans, past and present, have crafted wonder in conversation with built environments. 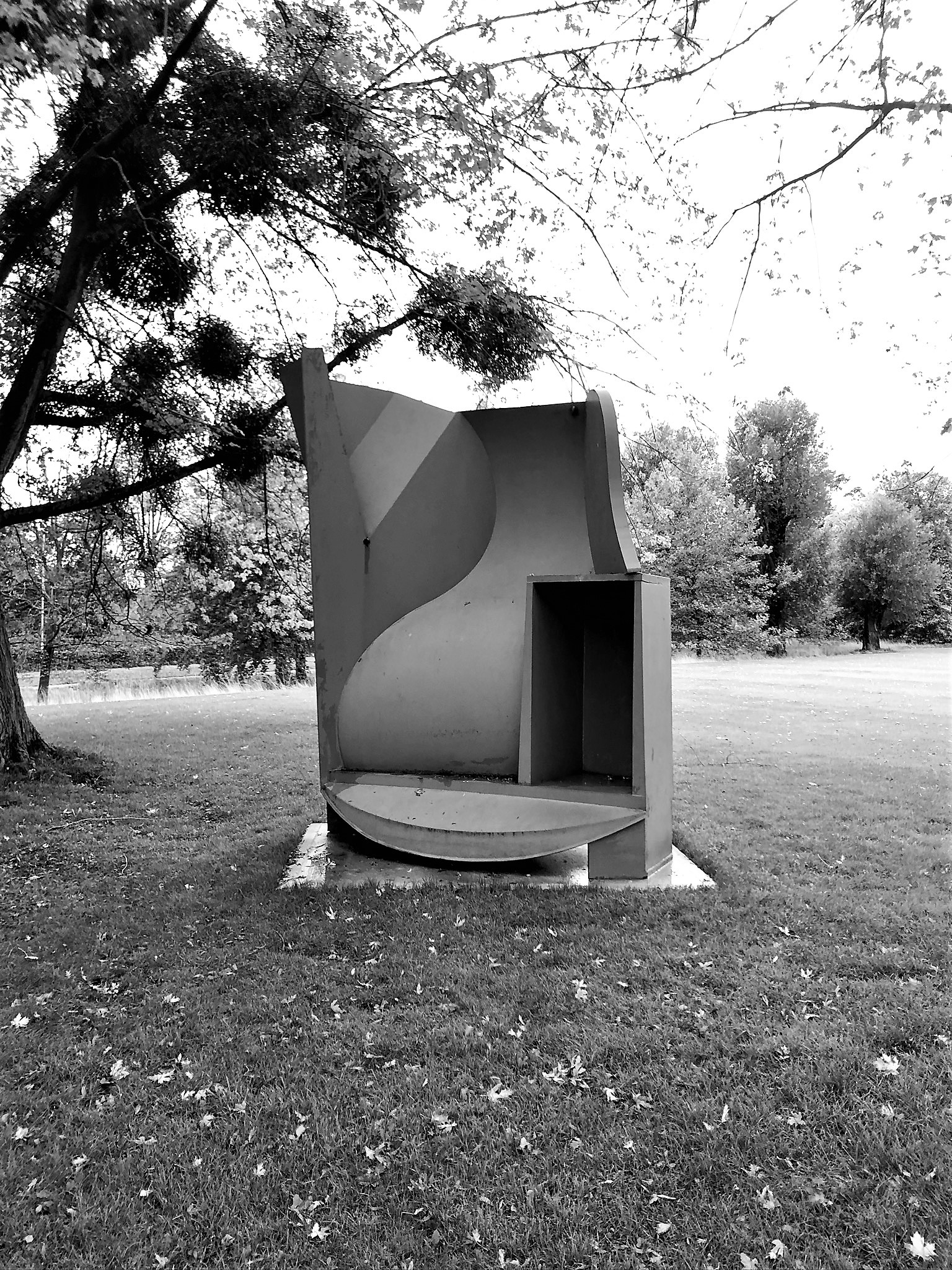 Peter Hide, Plainsong (2000) at Churchill College, Cambridge. Photo courtesy of the author, Joshua Fitzgerald. Copyright the Artist. This copyright applies to all images used in the post.

I wonder, can one melt metal into resounding places and can abstract art reproduce songs in steel? These odd questions are inspired by the recent call for studies for the upcoming CRASSH conference Multimedia Craft of Wonder (December 2021) and the collection of wondrous works of art at Churchill College. A brief exploration of one such work, Plainsong (2000)—a recent addition to the College crafted by the sculptor Peter Hide—will help demonstrate why and how song, in this case Christian chanting from the medieval and early modern period, continues to resonate in modern sculpture.

Constructed from massive slabs of bent and bonded steel, Plainsong rings with geometry and movement. It is cast in mild, low-carbon steel that was then sandblasted and painted scarlet. Plainsong is an upright of monolithic proportions (343 x 277 x 132 cm). Thematically, it explores the simplicity of shapes and positive and negative space. Its mass and smooth exterior adds to its gravitas, similar in this regard to work by Auguste Rodin and Sir Anthony Caro. Rubignious but not rusting, Plainsong’s punchy colour pallet differs from the stark materiality of many of Hide’s other, exposed works. Instead, its uniform surface speaks to a harmony between timelessness and architecture.

Plainsong is a conceptualization of volume in phases. The eyes can follow the light playing off its immense “S”-shaped rolling backdrop; the enclosed, enigmatic boxy alcove; the thin bell that sits above that box; and, opposite the bell, a suspenseful triangle that juts out into space, defying expectations. These simple forms play out over Plainsong’s base, a raked apron or proscenium that just barely contains the above composition. The overall effect reminds the viewer of a concert hall or choral performance space and creates a sense of awe. Today, rising over Churchill College’s green, Plainsong seems suited to serenade a variety of landscapes. But what does Hide’s composition sound like? 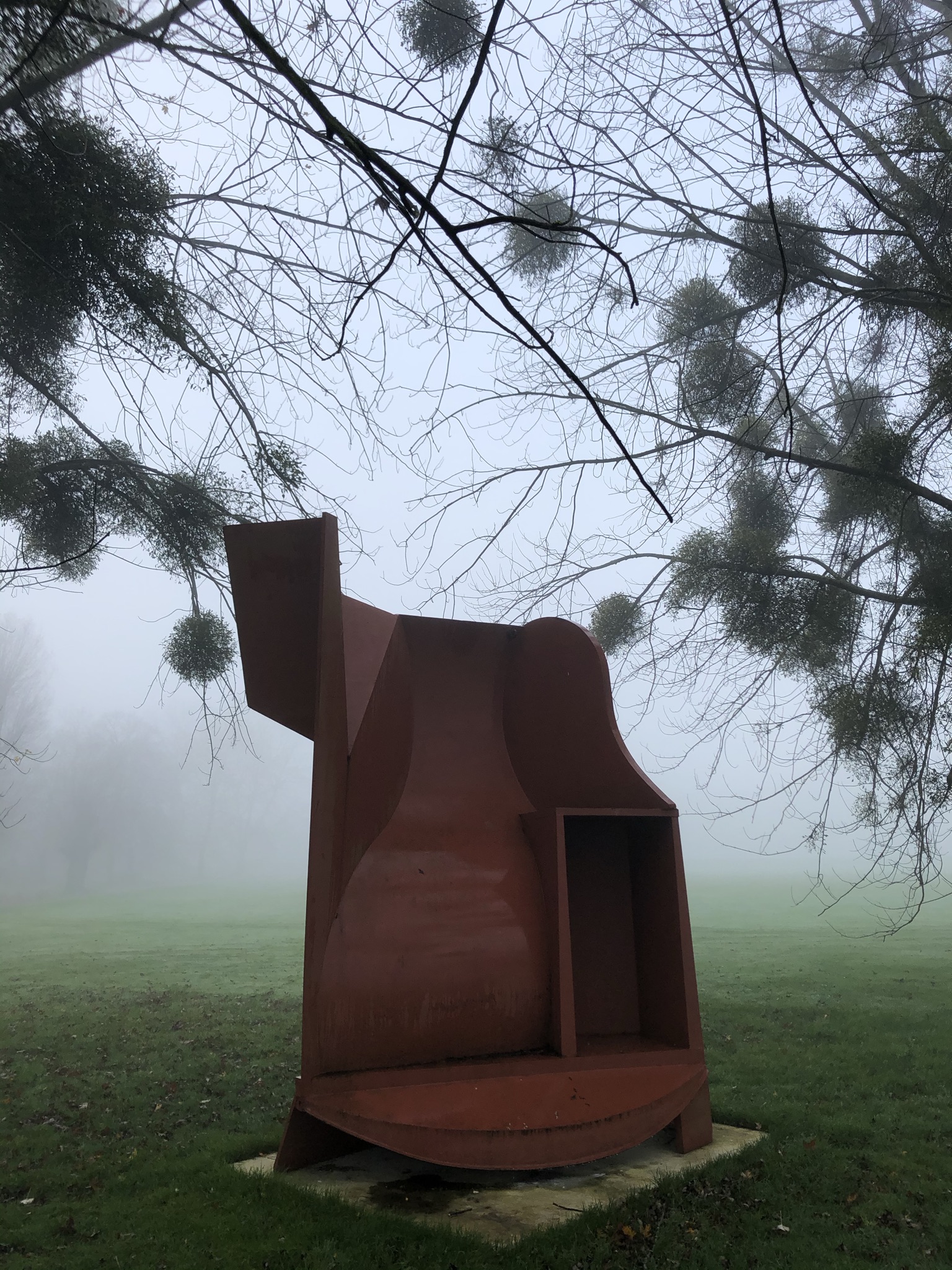 Hide has been defined as one of the greatest living monumental sculptors of modern art. Since 1977, Hide has lived in Canada, teaching and inspiring cohorts of artists at the University of Alberta, Canada. He studied metalwork in modern art’s past and worked with some of the best-known British sculptures, working with Caro at St Martin’s School of Art in the 1960s. His methodology developed in conversation with Caro’s use of steel and colour, but, by the 1970s, Hide’s interest in architectural forms and how one might contain grander works in space distinguished him from his predecessors. Hide moved away from the sense of linear geometry he found in Caro’s work. Hide qualifies, Caro’s Early One Morning (1962), crafted at the height of high modernism, “was warm, elegant, and extensive, but not massive” (Personal Communication 2021). Hide became inspired by the monumentality of Michael Steiner’s sculpture: as he recalled in a 1999 interview, he decided to “body forth the discoveries of abstract sculpture in a more robust and monumental form” (Hide, 1999). This desire gave rise to the distinctive weightiness of his work.

In the late 1990s, while teaching at the University of Alberta, Hide delved into the monumentality of performance spaces for a commissioned work for Winspear Centre in downtown Edmonton. The winning piece, entitled Full House (1998), sits in downtown Edmonton, welcoming visitors to the Performing Arts Centre. Plainsong—formed before Full House—took shape through Hide’s study of the centre’s modern interior. Both sculptures distil Winspear’s foyer, balconies, and stage into scarlet steel. Reflecting on its composition during a recent interview with the present author, Hide explained that the juxtaposition of the “S”-shaped curved backdrop—what he describes as “the essential lyrical nature of music”—and the rectangular alcove signifies the “shaping of sound.” Plainsong is not verbal, he continued, but a visual articulation of a place where music is performed. When welding slabs of steel, Hide says he hears white noise, what he calls the “sizzle” of arcing electrons buzzing between melting metal (Personal communication, 2021).

Plainsong’s composition also has all the trappings of tradition, calling back to High Baroque architecture and stark shadow plays. It resembles what art critic Terry Fenton once described as Hide’s tendency toward “stiffened, geometric drapery” (1984). What may have inspired this craft? Throughout his life, the artist has drawn inspiration from the grand serpentine facades of the Baroque architect, Francesco Borromini (1599-1667), studying in Rome and Florence early on. But his roots are in South East England, in Carshalton, Surrey, where Hide grew up. Carshalton is an ancient English town, remembered back to the Middle Ages for its trout fisheries, walnuts, watercress, and lavender fields. Carshalton’s oldest structure is the twelfth-century All Saints Church, well parts of it anyway, and growing up surrounded by early-modern provincial structures, Hide explains, “you can’t help but to have it seep into you, creeping into your work” (Personal communication, 2021). Historically, old Carshalton and All Saints Church were likely settings for the performing of one of England’s oldest oral traditions: plain chanting, the musical art from which Plainsong derives its name.

What is plainsong? Medieval plainsong or plainchant was a communal form of Christian liturgy and worship, codified in manuscripts in the Middle Ages, though its roots are far deeper in human history. It is a living tradition with complexities I will not deign to plumb here, except to note that chanting likely developed to allow communities, their religious leaders, and a practiced choir master (cantor) to vocalize Christian liturgy and affect a sense of divinity in ritually used places. Usually unaccompanied by instruments, plainchant was still a carefully crafted and multimodal artform. Choir masters gave vocalists visual cues, gesticulating to a set of symbolic notations, the neumatic script, which would be recalled from memory or, eventually, archived in early manuscripts. Additionally, chanters interacted with their environment, drawing upon the acoustics, which were informed by the chapel’s interior dimensions. Architecture influenced chant pacing and intonation.

Reflecting upon Hide’s Plainsong—a discreet abstraction of performance architecture—helps to reveal the multidimensionality of crafting art with sound. Historically, by bonding performances to sacred spaces and reducing song to its monochromatic pallet, chanters created a sense of wonder tied to a sense of place. The artform’s vernacular qualities and repetitive application allowed for more singers to join in over time. And the vacuous pauses between sung lines and rolling vocal expanses created a narrative, heightening the audience’s anticipation and allowing one’s ear to catch the echoing vocals off a chapel’s stone walls, ceilings, and floors.

Voices bound off Plainsong. Try it. Chanting notes or carrying a simple melody next to it causes an audible, though dull, echo and the hum reminds us that taught metal strings produce lithe and dynamic tones for an orchestra. Plainsong doesn’t sing on its own, but it can augment human chants because of its extensions and recesses. By drawing attention to the creative potential and playfulness of architectural acoustics, Hide’s Plainsong re-sensitizes us to the awe-filled performance spaces of both the past and the present.

About the Author:
Josh Fitzgerald is the Jeffrey Rubinoff JRF with Churchill College (2020-2024), investigating the theme of art as a source of knowledge in the context of the art history of pre-colonial Mesoamerica and early modern Mexico. Fitzgerald focuses on the material culture and historical documentation of Nahua people (speakers of Nahuatl, commonly mislabelled as the “Aztecs”) from Central Mexico. His forthcoming book, An Unholy Pedagogy: Mesoamerican Art, Architecture, and Learningscapes under Spain, examines the dynamic ways artist, community and sense of place informed the crafting of didactic media, as seen in paintings, sculpture, ornamentation, and architecture. Peter Hide’s work, among other modern artists, and the study of medieval/early modern plainsong both influence Fitzgerald’s research, especially as they relate to the history of ritual chanting, and his publications will add to the discourse on Nahuatl plainchant studies, noted by specialists as a key and “valuable pedagogical tool” in the process of transculturation in the Americas, beginning in the sixteenth century (Truitt, 2010).

For further study:
• Readers may be interested in listening to example performances of plainchant here: https://www.youtube.com/watch?v=H4ZuHM5krp8, or listen to John Rowlands-Pritchard, a leading expert on the matter, discuss plainsong’s significance here: https://youtu.be/dbFQeUUYI88
• For news about Peter Hide and his award-winning collection, see: https://www.peterhide.ca/
• For an example of a popular Nahuatl from Colonial Mexico by the composer Hernando Francisco, see: https://www.youtube.com/watch?v=sGu_ctQGBO4.

And Cambridge’s own Association for Gregorian Chant, the Schola Gregoriana, at: http://www.scholagregoriana.org/

To Make a Man Seem Headless →